Velocity of Money-What is happening?

This paper mainly deals with the velocity of money. The main purpose is determining what happens to the velocity of money when certain changes occur in economic variables. The variables of interest are the ones which are closely related to the velocity of money such as average money holding and consumer spending. Also, the paper takes other variables such as interest rate, inflation and CPI into account (mainly these will be used to perform required calculations). The paper is divided into two sections: the first section concentrates on the theory, whereas the second one focuses on the application of the theory.

Thus, the velocity of money can be written as:

Transaction costs and interest forgone costs can be written as below:

Minimization of the Total Cost of Cash Management

Mathematically, total cost of cash management can be written as,

{where f is a function which assigns to each positive T, some other f(T)}  Note that T >0, in all cases. Taking the derivative of f(T) gives marginal cost which can be mathematically written as,

Equation 3 gives the values of T such that it either minimizes or maximizes f(T). In order to find out the value of T, such that equation 1 is minimized, the concept of double derivative should be applied.

The behavior of the transaction cost, interest forgone cost and the total cost can be illustrated by the graph drawn below. Let us assume that T# is the number that minimizes the value of f(T) in equation 1. 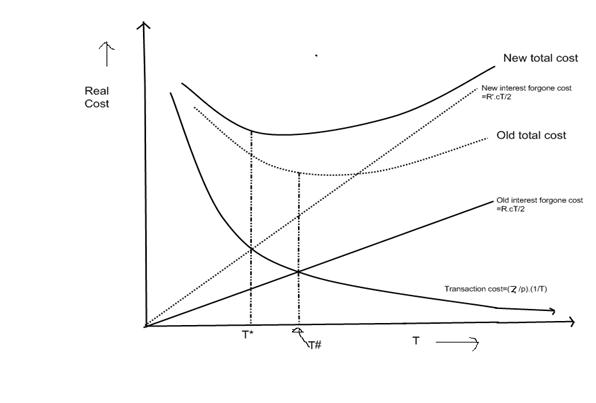 Thus, from the graph, one can see that the rational person attempts to choose T# such that it minimizes the total cost. As T approaches infinity, the transaction cost approaches 0. But the result seems to be directly related in the case of interest forgone. Furthermore, rise in R will move the interest forgone line towards the left because people react to the change by shortening the time interval T. In other words, people become more concerned about the interest forgone cost than the transaction cost. Also, the total cost minimization happens at T*, which is noticeably less than T#.

After reaching this conclusion, the rest of the paper concentrates in analyzing the trend of the velocity of money from 1959 to 2008; and it will be related with the interest rate of the respective years.

To calculate the velocity of money, I used the historical data of personal consumption, frankly, to keep the model simple. M1 was used to calculate the average holding of money. All of the numbers were converted to the real terms and were tied to the 2008 dollars. The annual federal funds rate was used to analyze the relationship between the interest rate and the velocity of money. The annual federal funds rates were obtained online and no changes were made to them. Also, the correlation between the federal funds rate and average money holding (average of M1) from 1959-2008 was calculated to be        -0.4853. Even though the correlation coefficient is not strong, it justifies the claim that the interest rate and money holding are inversely related. Moreover, the correlation coefficient of personal consumption and velocity of money from 1959-2008 is approximately 0.957. From the calculated coefficient, it is obvious that the velocity of money and personal consumption are very strongly related.

Graph 1. This is the graph of the velocity of money v/s the time line. Time line is listed on the horizontal axis and velocity is on the vertical axis.

Graph2. This is the graph of the annual nominal federal funds rate. FFR is on the vertical axis in % and time frame is on the horizontal axis.

This paper dealt with simplistic, but also at the same time, extremely important material. I carefully analyzed the trend of the velocity of money of the U.S., and I tried finding the relation between the velocity of money, interest rate and personal consumption.  In the process of doing so, I collected the historical data of personal consumption, annual nominal federal funds rate, money holding (M1), inflation rate, and CPI from the Federal Reserve's website. Also, the desired data such as the real federal fund rate, real M1 tied to 2008 dollars and real personal consumption were computed by me.